Always check with your Veterinarian before using any flea & tick product! 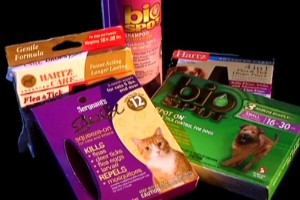 The products are sold in major supermarkets and pet supply stores. They’re meant to get rid of fleas and ticks on your pets. But after looking closely through government data, NBC Los Angeles found thousands of reported pet illnesses and deaths that are linked to these products.

For many of us, pets are like members of the family. Which is why it would be devastating if your dog were to suddenly collapse, or drop dead, after you used a pet product that is approved by the U.S. Environmental Protection Agency (EPA).

Dr. Jeff Werber, a well-known Los Angeles veterinarian says, “Do I want to risk my own cats to that? I have six. The answer is “no.”

The products we investigated are flea and tick shampoos and drops sold by major companies like Sergeant’s, Bio Spot, and Hartz. They all contain the same type of pesticide, called pyrethrins or the synthetic versions known as pyrethroids.  These are the same pesticides in household products like “Raid,” used to kill bugs around your home. Several stores where we bought the products told us they were completely safe.

That’s what one well-known pet supply store told Heidi Woehler of Santa Clarita, when she bought Bio Spot Flea and Tick Shampoo for her two cats, Hummer and Samson. “I read the directions and I followed them thoroughly,” says Woehler.  But within minutes of applying the shampoo, she says both cats began having seizures, especially Hummer.  “He’s shaking, he can’t breathe, said Woehler, recalling the incident. An emergency room veterinarian saved Samson. Hummer didn’t make it. Woehler says, “He died a horrible, violent, fast death.”

This isn’t an isolated case. We looked over the U.S. EPA’s database of reported incidents involving domestic animals, from all products containing pyrethrins and pyrethroids.  We found numerous cases of animals whose skin was burned, animals that had seizures and vomiting. We found tens of thousands of reported incidents, including thousands of deaths.  Even the EPA admits, it’s not sure yet how many thousands of animals have been harmed by these pesticide-based products.

“If they’re on a shelf in a grocery store or drug store, you assume it’s been tested and is fine,” says Rich Parsons, a pet owner from La Quinta, California.  But when Parsons applied Hartz flea and tick drops to his dog Duffy, he says the dog started having seizures the following day.  Two days later, Duffy died at a pet hospital.  “This was not a pleasant death,” Parsons said. “This was a devastating loss for us, because he just meant the world to us,” he added.

Rich Parsons and Heidi Woehler are not alone. There are now entire websites, like Hartzvictims.org, where pet owners report illnesses and deaths after using products containing pyrethrin and pyrethroid pesticides.

Veterinarians we spoke with, like Dr. Jeff Werber, say an unknown percentage of pets do have adverse reactions to these store products.  “We do know that some of these products can be toxic. We don’t know as to what degree,” says Dr. Werber.   That’s why so many veterinarians and groups, like the Humane Society of the United States, are speaking out against store flea and tick products containing these pesticides.

“There are absolutely safer alternatives generally across the board,” says Dr. Werber.   Most of these safe and effective flea and tick products are only available from your veterinarian.

When Rich Parson’s dog Duffy died, his veterinarian wrote that it was a “reaction to the insecticide” in the Hartz drops that contributed to the dog’s death.  But Hartz had it’s own experts review the case, and after their investigation, they “denied any responsibility,” blaming Duffy’s death on “underlying health problems.”

When Heidi Woehler’s cat Hummer died, her vet wrote that based on the cat symptoms, the pyrethrin in the Bio Spot shampoo “contributed to Hummer’s death.” Woehler says before she used the shampoo, Hummer “was a perfectly healthy cat.”  Bio Spot paid for an autopsy, which we asked Dr. Jeff Werber to interpret for us.  When we asked Dr. Werber if it were possible the shampoo contributed to this cat’s death?” Werber replied, “I think it’s highly likely that there was a contributory factor to this product and this cat’s demise.”  Still, Bio spot’s parent company told Woehler in a letter “We do not believe (Hummer’s death) was a result of using our product.”   Bio Spot never explained why they believed the cat died. Heidi Woehler is convinced it was the Bio Spot shampoo. “It needs to be taken off the market,” she says.

In fact, the U.S. Environmental Protection Agency tells us it has begun a major review of these flea and tick products, to make sure they’re really safe. Based on this review, the EPA could take action, such as requiring new labeling, or even pulling certain products from the market.

As for the companies in our story, they all claim their products are safe when used as directed.

By Joel Grover and Matt Goldberg

Send Us A Message